by Thita (admin) on September 16, 2012
in Community Articles

Have you ever wanted to make your own LEGO game? It isn’t as hard as it seems! Ninjago already has its own spinner game, but my brother and I wanted to incorporate that into an even bigger LEGO board-game. 😛 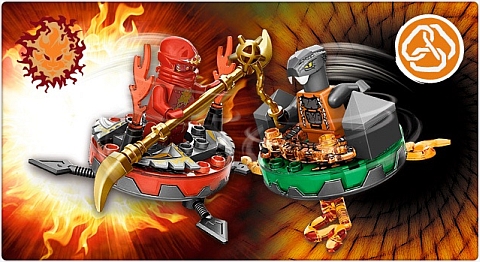 So we started out making a LEGO game-board, using most of last year’s locations; the 4 Weapons Blacksmith Shop, the Dojo, the Frozen Wasteland, Floating Ruins, Fire Temple, Caves of Despair, Forest of Tranquility, and a City. 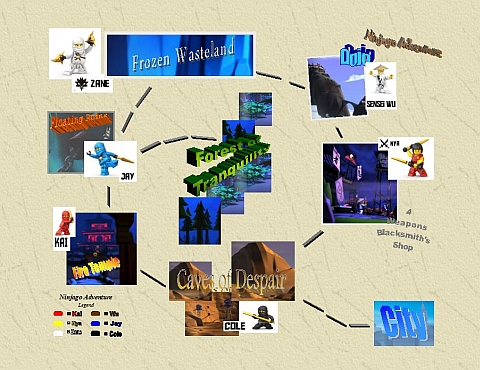 After we finished the basic board, we started thinking up some rules – how to move was obviously the first one needed! So we finally settled on using a LEGO die (available in any of the LEGO Games) with the following color tiles on its sides (as indicated on the bottom of the board): Red for the Fire Temple (Kai), Blue for the Floating Ruins (Jay), Black for the Cave of Despair (Cole), White for the Frozen Wastelands (Zane), Yellow for the Blacksmith’s shop (Nya), and Brown for the Dojo (Sensei Wu).  We made the game before Lloyd was around. If you wanted to add him to the game, you could make his space the Dojo as well as Sensei Wu’s.

Whichever color you got would be your next stop – if you got yellow, you’d go to the Blacksmith’s, Brown, visit the Dojo, etc. Then, of course, there had to be an object of the game – getting the four golden weapons seemed like a good idea. 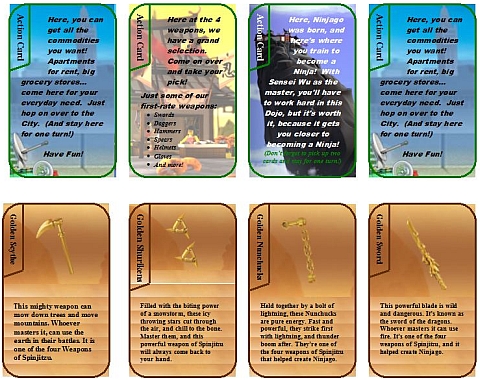 So we made a deck of 24 cards, each with one normal weapon except four which had the golden weapons of Spinjitzu and a few “go to” action-cards. And finally we came up with an entire set of LEGO game rules:

➡Object of the LEGO Ninjago Game: Be the first to have all the golden weapons at the same time. This player is the winner. 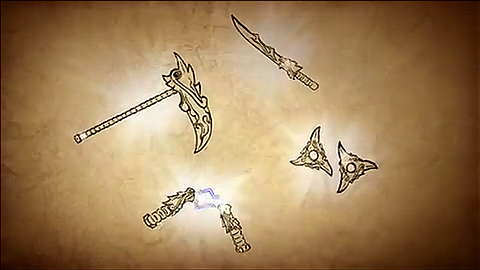 ➡ Setting up the LEGO Ninjago Game: Each player needs the following or its equivalent: a Ninjago weapon, character, character-card, and spinner. If you have Ninjago battle-cards you may use them as well.

➡ Moving in the LEGO Ninjago Game: Roll the die. Follow the instructions on the die and in the legend.

➡ LEGO Ninjago Game Cards: Here are the instructions for using the game-cards during the game. 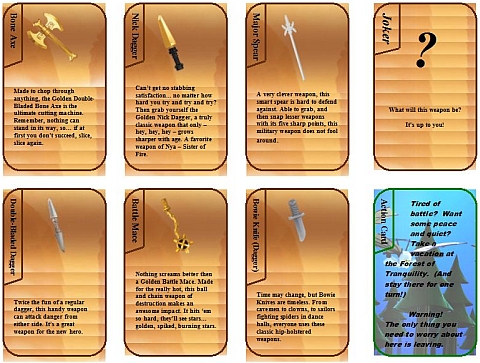 ➡ Fighting in the LEGO Ninjago Game: When you land on a space (excluding City or Forest of Tranquility) you must fight by spinning against any opponent who is on that same place. The only exception is if you, they, or both, do not have any weapon cards. Then you may not fight. After one battle (when you or your opponent has lost a weapon) you may stop attacking. No matter what happens, both players remain on the place until their next turn. A player who loses all their cards is not out of the game.  The winner chooses which weapon to take. See the Ninjago Battle Guides for instructions on who wins and how to spin.

➡ Other LEGO Ninjago Game Rules: Here are some other rules for the Ninjago game we came up with.

We made the game-cards by printing out the backs, then the fronts, and then gluing them together, and finally laminating them. Of course, you could make a game that didn’t need cards at all, or change our game by putting weapons in a bag and having players draw them when necessary. 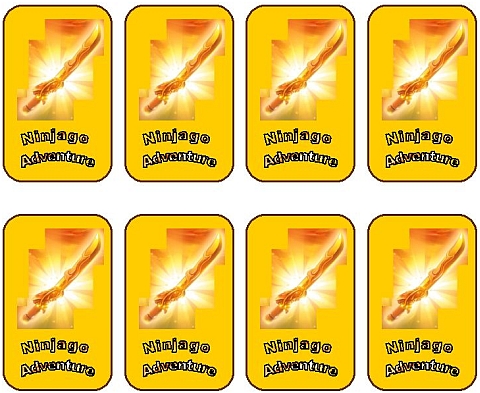 So, how do you like the idea of making a LEGO game? Are you going to try one? You’re welcome to use any of our rules or templates as well! (Of course this game is for your own private use; you may not market or sell such games without permission from the LEGO Company.) Feel free to share any comments or questions you might have below! 😉

If you would like to try out our LEGO Ninjago Game, you can download the PDF files of the game-board and the cards here: