I’ve got bad news for anyone who thought our fearless LEGO ninja heroes would have some vacation time after defeating the evil Serpentine in the last volume: the Stone Warriors are here, and they’re up to no good! What’s worse is that the mystical weapons of Spinjitzu are missing, leaving Jay, Cole, Zane, and Kai powerless against this new threat. Well, maybe not powerless – Sensei Wu believes it’s time to train their wits, and they’re certainly going to have the opportunity now… 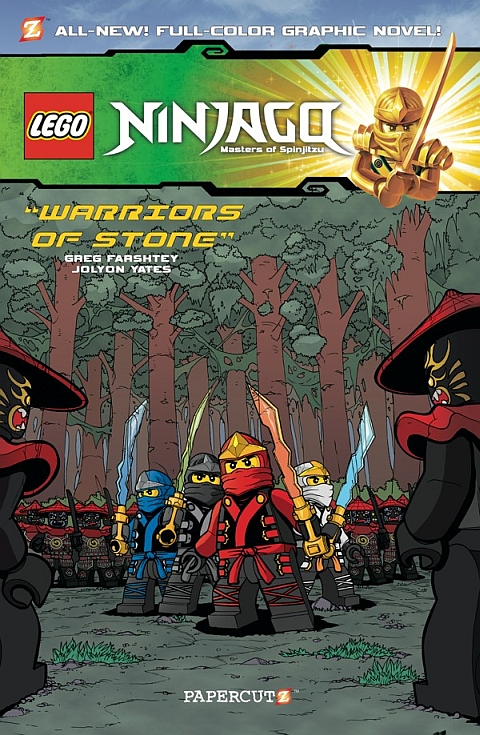 Here is the official description of LEGO Ninjago Warriors of Stone: “Jay, Cole, Zane, Kai, and Sensei Wu are strangers in an even stranger land; Garmadon City! But the name is not what’s strange! The fact that everything is made of stone – the streets, the buildings, the trees, even the people! – that’s the really strange part. But how do you save people who have been turned into stone who don’t want to be saved, and will do anything to stop you? That’s exactly what the Masters of Ninjitzu must find out before it’s too late!” 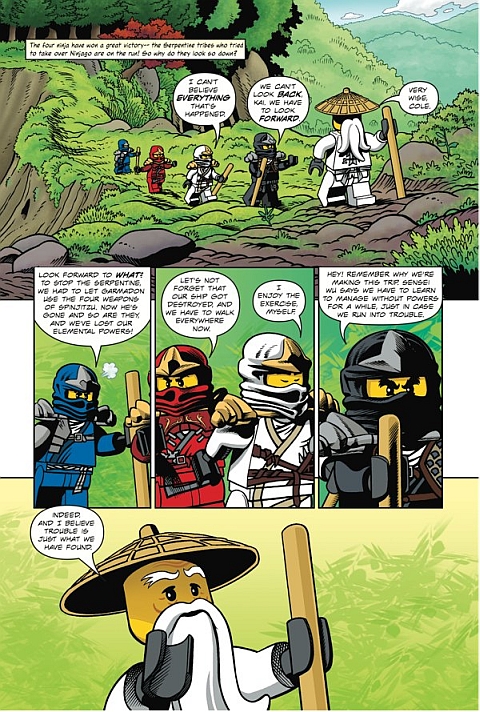 Above is the first page in the book. I have to say that LEGO NINJAGO Warriors of Stone is awesome! One of my favorite volumes so far, and I have read all six of them. It is full of twists and turns, and surprises await you on every page as you learn more about the Stone Army and the story behind it. And as usual, the graphics are excellent with vibrant colors and great details, bringing our favorite LEGO ninja heroes to life… well they almost turn into stone, but that’s part of the story… I can only say; buy the book!

Jesse Post, the Marketing Director of Papercutz says the following about this latest volume: “As LEGO Ninjago crossed the 1,000,000-copy sales mark, the new storyline beginning with “Warriors of Stone” is a great time to jump on board the New York Times best-selling graphic novel series. With writing by master LEGO story architect Greg Farshtey and unparalleled art from Jolyon Yates, the series is a win with kids and anyone who loves to spend a rainy day with a pile of LEGO bricks. Plus, Yate’s hilarious stone grizzly bear will be everyone’s favorite LEGO villain by the end of the book – trust me on that!”

I also have a favorite quote from the book I wanted to share. Pearls of wisdom from Sensei Wu as he is talking to a doubtful Jay: “Ninja are the ones who go where others fear to walk, Jay. We have survived the fires of the Underworld and the gaze of the Great Devourer… we will survive this too.” 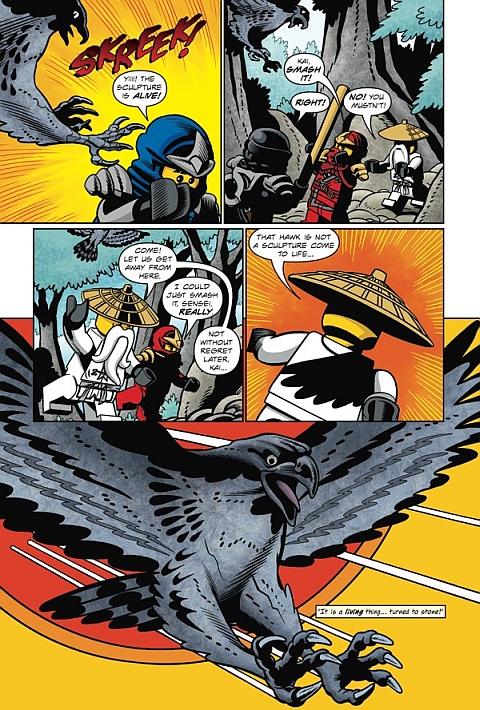 And for Ninjago fans who are wondering about the fate of Ninjago, there are some interesting tidbits hidden inside the book. First of all at the back of the book there is a letter from Papercutz editor-in-chief Jim Salicrup. Below is an exert from what he says:

“It seems that wherever you look these days, you’re going to see Ninjago! It’s truly NINJAGO-MANIA! In addition to the best-selling Papercutz Ninjago graphic novels, there’s also the hit Ninjago TV series on Cartoon Network and the Ninjago chapter books from Scholastic. Perhaps the only place you don’t find Ninjago is on toy-store shelves in the LEGO section – because they sell out so fast! Don’t give up, there’s more on the way!”

Did you catch that last sentence? Also, this was not done in the previous volumes, but in LEGO Ninjago Warriors of Stone there is a special 4-pages long preview of the 7th book in the series called LEGO Ninjago Stone Cold, where Sensei Wu reveals to the ninja that he didn’t tell them everything about his past. He says:

“Beyond the edge of the world, there is a place called the Tower of Tears. It has no doors or windows… only a true Spinjitzu master knows how to get in our out. Imprisoned inside the tower were the worst villains on the planet… or rather, they were imprisoned there until someone blew it up. With their prison destroyed, they were free to stalk the night again. And to seek revenge on the man who put them into that tower: Sensei Wu.”

What do you think? Well, actually… first buy the book. Seriously. The paperback version is only $7, and a must for any Ninjago fan. Then tell me what you think about those clues in regards to the future of Ninjago. Feel free to share and discuss in the comment section below! NINJA… GO!!!