One of the most interesting LEGO Marvel Super Heroes sets that was recently released is the #76038 LEGO Marvel Super Heroes Attack on Avengers Tower. The set is based on the upcoming The Avengers: Age of Ultron film, where the Avengers Tower comes under attack from the inside from the evil Ultron Mark 1 that assembles itself in the lab and is exploding out the windows. The set in itself looks fantastic with great shaping, gorgeous translucent-blue windows, and fun play-features. The only issue is that the tower is kind of on the short side, compared to how tall it is in the film. So it was inevitable that some LEGO fans were going to give the tower some height to bring it to its full glory. 🙂 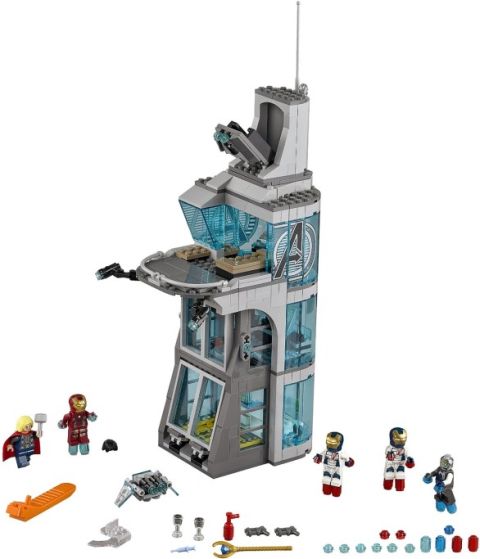 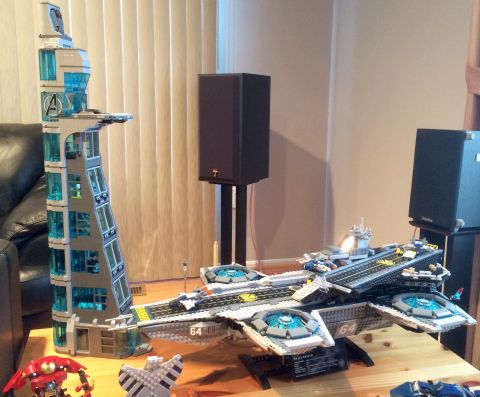 On his flickr page cmay91472 shares that to start out he bought two of the #76038 LEGO Avengers Tower set – which is a good idea, and one of the cheapest ways to expand most LEGO sets. However even with a second set additional pieces were needed to provide stability. He says: “You will need a large number of both dark-gray and light-gray 1×12 bricks to essentially sister each of the existing 1×12 bricks used in the official set design, otherwise the tower will be very fragile. You will also need a lot of trans-light-blue 2×6 bricks and trans-light-blue curved window pieces. I suppose you can buy a third set, but from my count that will still leave you a number of bricks short in regards to the 2×6 and 1×12 bricks. All of the other additional pieces I used not found in two sets are fairly common that most LEGO fans will have plenty of. It’s the trans-light-blue pieces and 1×12 dark-gray and light-gray pieces that may pose a problem.” You can see more pictures of LEGO Avengers Tower 2.0 and LEGO Avengers Tower 3.0 by following the links. As you will notice, he also added lights to the towers. 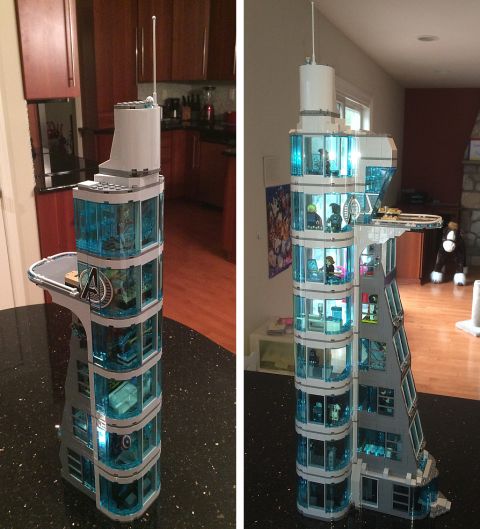 As you can see, building a more realistic version of the LEGO Avengers Tower is quite possible. The #76038 LEGO Avengers Tower is only $60, which is not bad for a LEGO set with so many useful pieces. Buying two would set you back $120, however you can reduce the cost by selling the extra minifigs on the secondary market. All additional pieces that you would need can purchases on BrickLink.com, or you may already have them in your collection. If you would like to tackle this project and want to be sure what it would cost, you can first build it in LEGO Digital Designer. This way you can work out the details and come up with an exact part-list. 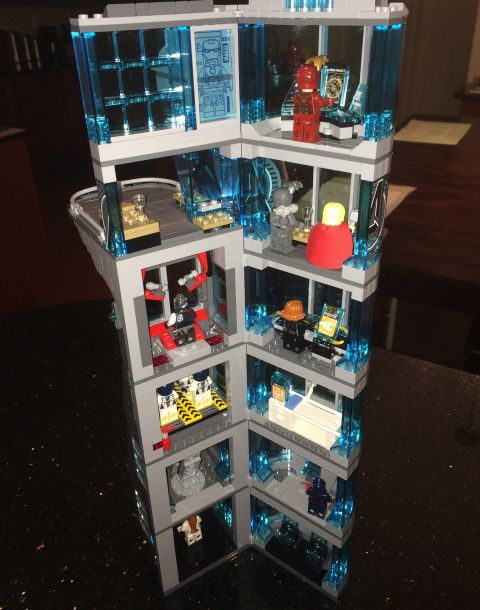 The point is that the #76038 LEGO Avengers Tower is a great set that looks good on display as it is, or can be added to any LEGO City or even futuristic setting. It also comes with great play-features, and lends itself to modification and expansion. If you would like an interesting building project and some fun challenge, this might be just the right one for you. You should be able to find the #76038 LEGO Super Heroes Avengers Tower at most LEGO retailers, and it is also available (along with all the other new LEGO Marvel Avengers: Age of Ultron sets) at the Online LEGO Shop.

So what do you think? How do you like the LEGO Avengers Tower set? Do you have it already, or is it on your shopping list? Have you considered expanding the set to make it taller? Feel free to share your thoughts and discuss in the comment section below! 😉

Next post: LEGO Legends of Chima Online shutting down