One of the most interesting sets LEGO released this month is the #76039 LEGO Marvel Super Heroes Ant-Man Final Battle. This set is related to the upcoming Marvel superhero film titled “Ant-Man” that is scheduled to make its world premiere in Los Angeles on June 29th, before the general release in North America on July 17th. The film is based on the Marvel Comics characters Scott Lang and his mentor Dr. Hank Pym who are safeguarding the mystery of the Ant-Man technology – which allows its user to decrease in size, but increase in strength. Of course – as in all superhero stories – the heroes will have to face various threats from badguys. 🙂 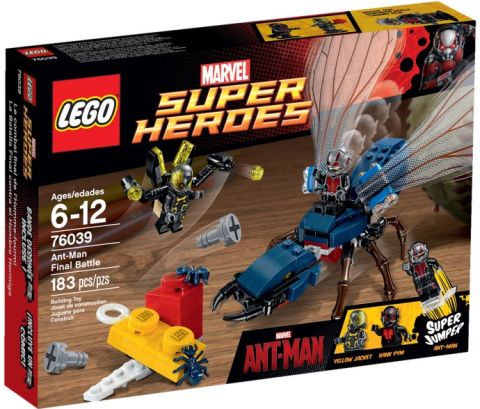 In the #76039 LEGO Marvel Super Heroes Ant-Man set you can see the story played out. Here is the official description: Capture Yellowjacket in the flying ant’s pincers! Get set for a massive battle on a micro-scale! Ride with Ant-Man on the giant flying ant, firing the flick missiles on each wing. Evade Yellowjacket’s stud-shooters and LEGO brick-built catapult. After landing, use Ant-Man’s special powers to communicate with the ants and activate the Super Jumper to knock over Yellowjacket. Take off again on the flying ant and swoop to capture Yellowjacket in its pincers! Includes 3 minifigures with weapon and accessory elements: Ant-Man, Hank Pym and Yellowjacket. 195 pieces. Price: $19.99 – BUY HERE 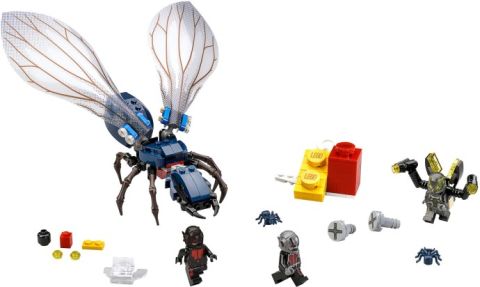 The #76039 LEGO Marvel Super Heroes Ant-Man set has a lot going for it. First of all there is the giant ant itself, which looks quite realistic and ant-like. The only thing I don’t like so much is the blue pieces to connect the wings, but these could be changed easily, if you want to. 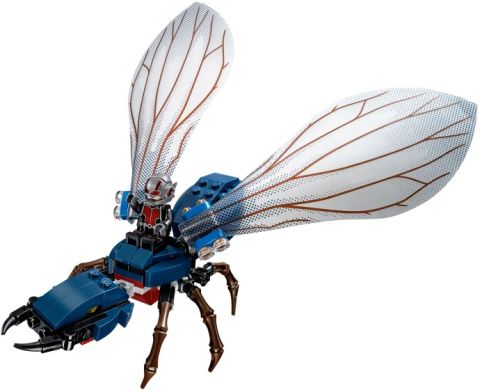 One of the most talked about feature of this set, ever since we have seen the first images, is the giant LEGO bricks. Having regular LEGO elements and large versions of the same elements is a great way to change the scale of the entire setup. I was hoping that the LEGO logo is printed on the round tiles, but they are in fact stickered. That’s a bit sad, but the large bricks themselves look great! They also serve a functional purpose by being a launcher that you can use to shoot out giant brick-built screws (with stickered round tiles for the screw-heads). 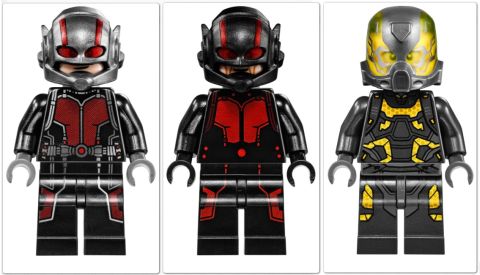 Another most talked about feature is the included minifigures. The fact that LEGO added three exclusive and well designed minifigs to such a small licensed set is just awesome. As you can see in the video-review below by JANGBRiCKS, each of the minifigs are fully printed front and back, with double sided head-printing as well. And those helmet pieces are absolutely gorgeous. LEGO has been playing with this new technique they recently developed of moulding together different color plastics, and the helmets made this way look ridiculously good.

Pretty awesome, isn’t it? I think this is one of the best LEGO sets and wisest LEGO purchases of the year; small price, interesting building-techniques, fun play-features, and three amazing minifigs. It’s hard to beat this combination! You should be able to find the set at most LEGO retailers by now (it does fly off the shelves fast though), and also at the LEGO Marvel Super Heroes section of the Online LEGO Shop.

So what do you think? How do you like the LEGO Marvel Super Heroes Ant-Man Final Battle set? Are you planning to get it? Or if you did get it already, how do you like it? You are welcome to share your own thoughts and review on it in the comment section below! 😉