The last wave of the LEGO The Hobbit sets, related to the final The Hobbit movie that will be released mid-December, are now available! And besides being the latest LEGO The Hobbit wave, it is also most likely the last one before the theme gets discontinued. So if you would like to complete your LEGO The Hobbit collection, or just would like to get some really nice sets and minifigures, here is your chance! And to sweeten the deal LEGO is including the beautiful poster pictured below with any LEGO The Hobbit set order. Also, don’t forget that we are still under the Double VIP Point period until the end of the month, plus you can get a free holiday set with orders over $99, so this is a great time to treat yourself. 🙂 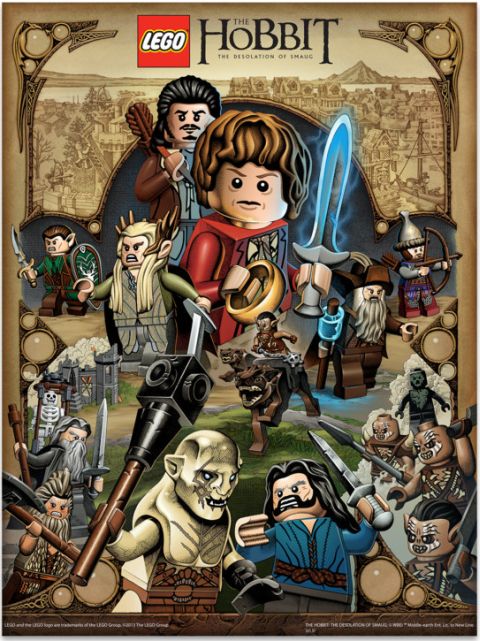 ➡ #79015 LEGO THE HOBBIT WITCH-KING BATTLE: Take on the evil Witch-king at the fortress of Dol Guldur! Galadriel and Elrond have ventured to the evil fortress of Dol Guldur where they are attacked by the ghostly Witch-king. Help our heroes to battle this vicious crowned foe with the glow-in-the-dark head. Reverse the faces of Elrond and Galadriel and use Galadriel’s Elven magic and The Light of Eärendil to overcome his evil powers. Evade fireballs shot from the catapult and connect all the skeleton bones to create an extra figure! Use Elrond’s golden sword to duel against the Witch-king who is spinning on the rotating platform for extra power. Who will triumph in this tense battle between good and evil? You decide. Includes 3 minifigures with assorted weapons and accessories: Witch-king, Galadriel and Elrond. 101 pieces. Price: $14.99 – BUY HERE 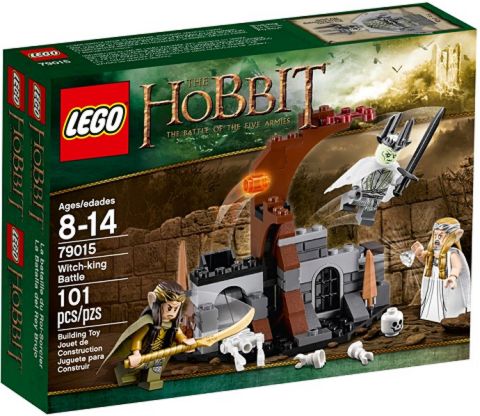 ➡ #79016 LEGO THE HOBBIT ATTACK ON LAKE-TOWN: Defend Lake-town from invading Orcs with Tauriel & Bard the Bowman! Lake-town is under attack from evil Orcs! Rush Bain son of Bard to the bell tower to hand over the Black Arrow to his heroic father. Target the invaders with the crossbow. If an Orc attempts to enter, the booby-trapped door will make fireballs fall on his head! Hurry across the bridge to defend the dock. Hoist goods up with the crane and activate the ladder explode function to send an Orc flying off the side wall. Board the boat with Tauriel and use her Elven warrior skills to outwit the enemy. Includes 5 minifigures with assorted weapons: Bain son of Bard, Bard the Bowman, Tauriel and 2 Hunter Orcs. 313 pieces. Price: $29.99 – BUY HERE 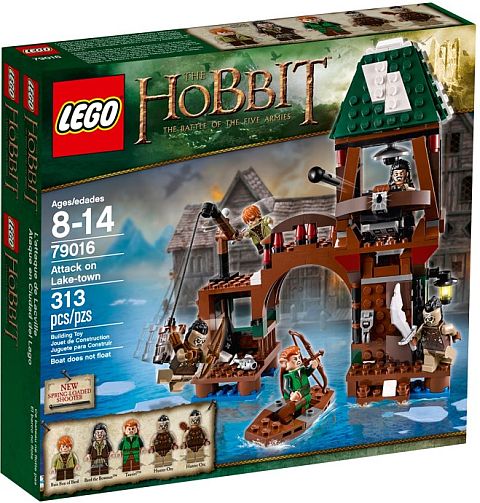 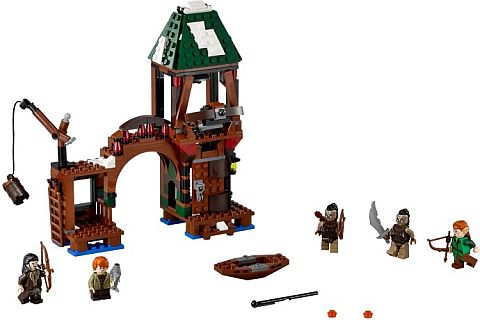 ➡ #79017 LEGO THE HOBBIT THE BATTLE OF FIVE ARMIES: Join forces against the Orcs in an epic conflict of 5 armies! The scene is set for an epic battle at the ruins of Dale as the Elves, Dwarves and Men unite to take on the fearsome Orc army. Keep watch for advancing Orcs from the look-out tower. Let battle rage between good and evil as the Orcs shoot giant arrows from the crossbow of their massive mobile battle machine. Activate the explode functions to bring the bridge crashing down and make one side of the tower collapse. With the evil Orcs threatening to emerge victorious, will Gwaihir, the leader of the Giant Eagles, arrive in time to assist our heroes? Includes 7 minifigures with assorted weapons and accessories: Thorin Oakenshield, Dain Ironfoot, Legolas Greenleaf, Azog, Bard the Bowman and 2 Gundabad Orcs, plus a Gwaihir figure. 472 pieces. Price: $59.99 – BUY HERE 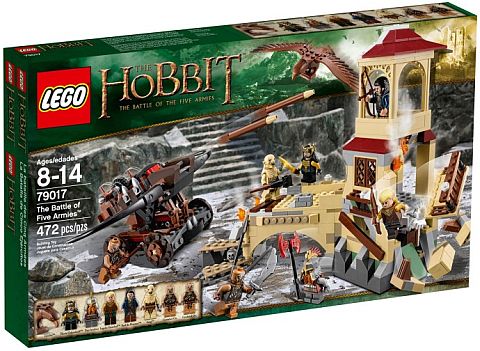 ➡ #79018 LEGO THE HOBBIT THE LONELY MOUNTAIN: Enter the lair of Smaug and evade the fire-breathing dragon! Bilbo Baggins has been sent to look for the Arkenstone inside The Lonely Mountain. Find the secret door into the lair of Smaug and enter with the Dwarves. Smaug is an enormous fire-breathing dragon, unlike anything you’ve ever seen before, so move fast! Dig deep for gold with the tools in the mining area, and use the slide to move the nuggets. Hoist the bucket with the sliding chain pulley to transport the gold to the forge. Seek out the throne in which the most prized gem of all – the Arkenstone – is placed… but watch out for the staircase trap! Bilbo Baggins and the Dwarves decide to drive the fearsome dragon out of the Mountain, and devise a plan to do so. Activate the rotating forge’s giant catapult to fire melted gold at Smaug while you try to defeat the fearsome dragon! Includes 5 minifigures with assorted weapons and accessories: Bilbo Baggins, Balin the Dwarf, Dwalin the Dwarf, Fili the Dwarf and Kili the Dwarf, plus Smaug. 866 pieces. Price: $129.99 – BUY HERE

If you are interested in a closer look of these sets, you can find many more pictures at the Online LEGO Shop. You can also watch video-reviews on the first three sets here: LEGO The Hobbit 2014 Sets Video-Reviews, and below is a nice review on the last and largest set by the Brick Show:

All of the new LEGO The Hobbit sets (along with at least some of the previous ones) should now be available at most LEGO retailers. And if you would like to earn Double VIP Points and get the free poster and holiday set, you can do your shopping at official LEGO stores or the Online LEGO Shop. 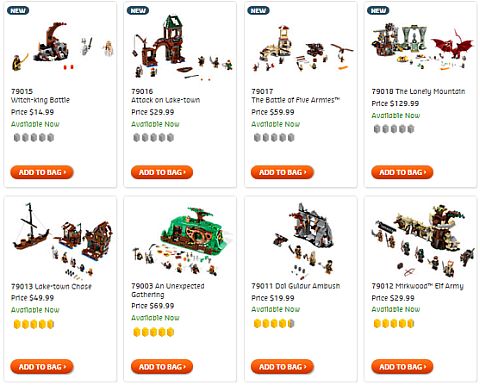 So what do you think? How do you like this last wave of the LEGO The Hobbit sets? Do you have a favorite? Which one are you planning to get? And how do you like the minifigures? Feel free to share your thoughts and discuss in the comment section below! 😉