LEGO Harry Potter: How to Kill a Dementor

by Thita (admin) on September 13, 2014
in Featured LEGO Creations

The BrotherhoodWorkshop recently released a fun LEGO Harry Potter stop-motion video, titled LEGO Harry Potter: How to Kill a Dementor. It comes with some interesting twists and surprises. Then in another video Kevin Ulrich will take us behind-the-scenes to see how the film was created, blending LEGO stop-motion and live action movements. 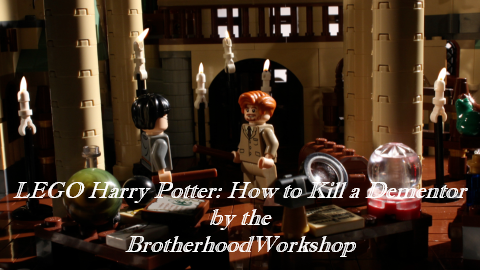 Dementors feed on the happiness of others. So what happens when they find a creature with limitless happiness? Can you guess who that is? Watch the video below to find out! 🙂

That was cute, isn’t it? Now let’s take a look at some of the techniques used to make the film. I really like Kevin’s behind-the-scenes videos, and this is one of my favorites. His ideas for creating realistic movement in LEGO stop-motion films are really clever. Here you will learn how to incorporate live action movement into a LEGO stop-motion film. In the video he also mentions another recent short film that he created for the popular How It Should Have Ended (HISHE) channel relating to The LEGO Movie. You can watch it directly on YouTube here.

So what do you think? How did you like the LEGO Harry Potter video? Feel free to share your thoughts in the comment section below! Also, if you would like to learn more about LEGO stop-motion, I highly recommend checking out the other videos from the BrotherhoodWorkshop listed below, or you can also visit their YouTube Channel directly for more.