The BrotherhoodWorkshop released another fun video and behind-the-scenes tutorial. This video is shorter than some of the previous ones, but it is still very funny. It’s titled LEGO Harry Potter: Umbridge’s First Date. 🙂 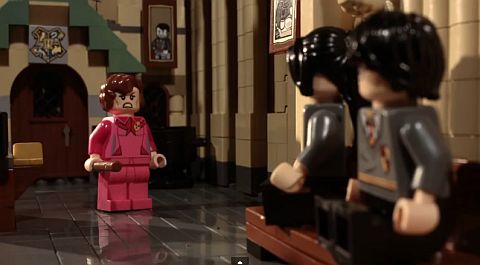 Kevin Ulrich from the BrotherhoodWorkshop writes: “There is little doubt that Dolores Umbridge is the most hated character in the entire Harry Potter series. But why is she so horrible? I propose that Umbridge is the way she is today because her first (and only) date, went about as wrong as conceivably possible…

So yeah, that explains why Umbridge is the way she is, doesn’t it? Now let’s follow Kevin behind the scenes to see how the video was created. To me this is always the most interesting part as Kevin regularly comes up with unique and creative ways to enhance his LEGO stop-motion videos. He calls them “ghetto methods” because they are cheap too, and they are more about resourcefulness and ingenuity than fancy and expensive equipment. The methods described in this tutorial are particularly interesting; instead of moving the camera, move the entire scene to create the illusion of motion.

So what do you think? How did you like the LEGO Harry Potter video? Feel free to share your thoughts in the comment section below! Also, if you would like to learn more about LEGO stop-motion, I highly recommend checking out the other videos from the BrotherhoodWorkshop listed below, or you can also visit their YouTube Channel directly for more.