Our favorite LEGO stop-motion animator Kevin Ulrich from the BrotherhoodWorkshop just sent me over a link to one of his most recent videos, and as I really liked it I thought to share it with you as well. I have also included the behind-the-scenes look at how the video was made, as those are always very interesting. Enjoy! 🙂 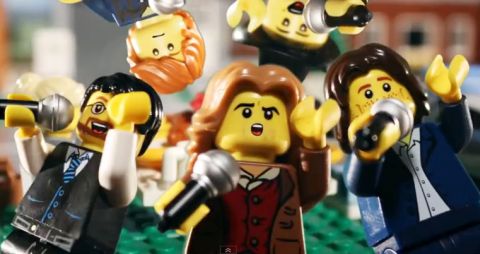 Fun, isn’t it? In the behind-the-scenes video Kevin mentions that this stop-motion film took over 200 hours to create. He also shares some of the techniques used for developing the story, for filming, and for changing facial expressions on the minifigures. I think the end result is a very enjoyable little film that matches the song perfectly.

You may have also notice that Kevin used some of the LEGO Modular Buildings for the street, including the #10246 LEGO Creator Detective’s Office and the #10218 LEGO Creator Pet Shop. Notice though, that he wasn’t afraid to use these sets creatively; taking them apart and stacking them in different ways to create a backdrop. Very clever.