LEGO The Hobbit: The Aggravation of Smaug

by Thita (admin) on August 3, 2014
in Featured LEGO Creations

Here is another wonderful LEGO stop-motion video from the BrotherhoodWorkshop for your viewing pleasure, titled LEGO The Hobbit: The Aggravation of Smaug. This video was sponsored by LEGO and also appears on the official the LEGO The Hobbit website. The second video is a behind-the-scenes look at how the film was made, which I always find very interesting and educational. Enjoy! 🙂 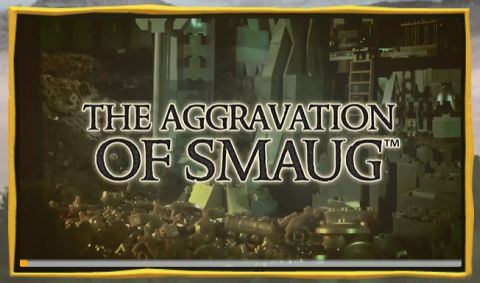 Kevin Ulrich mentions that to date this has been their most ambitious LEGO stop-motion video project, and as you will see below it includes everything from great animation, humor, and of course lots of LEGO gold. Also, this is the first time we can see in detail the upcoming LEGO Smaug character that will appear later this year in the #79018 LEGO The Hobbit The Lonely Mountain set.

Wasn’t that fun? Smaug is terrifying! And the best part is the pig – at least that’s what I think. The LEGO stop-motion animation techniques and special effects on this video are just excellent. In the video below you can go behind-the-scenes with Kevin as he explains how the film was made, and also shares some tips and tricks that aspiring LEGO animators can learn from and use as inspiration for their own stop-motion videos.

Previous post: All new LEGO sets & promotions for the month!