The BrotherhoodWorkshop, our favorite LEGO stop-motion film-maker, posted another fun LEGO video, and most importantly (at least to me), a behind-the-scenes tutorial on how some of the effects in the film were achieved. The video is titled LEGO Guardians of the Galaxy: Star-Lord’s Mix Tape. You can watch both the film and the tutorial below. Enjoy! 🙂

In this video Star-Lord share his love for old-fashioned cassette-players (remember those?). Groot, Rocket Raccoon, Gamora and Drax however don’t share his enthusiasm, and when Star-Lord’s device breaks down, he has no choice but the get with the times…

Like we have seen in previous films by the BrotherhoodWorkshop, Kevin is happy to share his tips and tricks of how the film was made. In the following behind-the-scenes footage, he shares how the effects of Star-Lord’s helmet, the rotating cassette-player, and some of the other scenes in the video were made. This is incredibly valuable information for LEGO stop-motion film-makers they can use in their own LEGO stop-motion films.

Interesting, isn’t it? While they are various tricks to make a LEGO stop-motion film as smooth and professional as possible, looks like the most important skill still remains patience, a desire for perfection, and very strong work-ethics. Kevin and his team are a great inspiration in this.

The LEGO Super Heroes sets and characters used in this film are from the recently released LEGO Super Heroes Guardians of the Galaxy line, including the awesome and very popular #76021 LEGO Super Heroes Milano Spaceship Rescue set (with Star-Lord, Gamora and Drax), and #76020 LEGO Super Heroes Knowhere Escape Mission (with Groot and Rocket Raccoon). If you are interested you can check them out at the Online LEGO Shop. 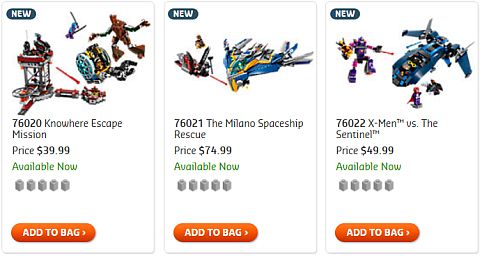 So what do you think? How did you like the LEGO Super Heroes video? Feel free to share your thoughts in the comment section below! Also, if you would like to learn more about LEGO stop-motion, I highly recommend checking out the other videos from the BrotherhoodWorkshop listed below, or you can also visit their YouTube Channel directly for more.

Next post: LEGO Ideas Exo Suit back in stock!